i finally bought a slingbox. i ordered it from amazon at an insanely discounted price with free shipping. anyhow i set it up last night in 5 minutes and tested it at work today for just a couple of minutes and it was soooo clean. i’m looking forward to having access to the other information superhighway (my uverse cable account) every i go so long as i have internet access.

slingmedia said that they would release an official slingbox iphone app before the end of the quarter. so, any day now 🙂

i just recently discovered this really neat game called Crayon Physics Deluxe. the object of the game is super simple, you basically draw objects that move a ball over, under and around obstacles towards a star. i saw this video clip for it and had to download the demo version to check it out.. it’s incredibly addictive!

anyways, this is a great game for smaller kids (and big ones like me too). there’s also an iPhone version of the game. so, here’s a clip of it.. and don’t worry you don’t need a tablet or touch screen, a regular computer mouse works just fine.

i just wanted to get the word out to iPhone users that there is another very cool new app for music lovers, especially those who like rare high quality concert footage. this one is called Concert Vault, from Wolfgang’s Vault. now this huge library of concert audio is available on the iPhone. enjoy, i know i am!

This is my first blog post using the iPhone wordpress app. I really like the interface. I doubt having the wp app on my iPhone will result in more posts, but it might.

that’s right, TicketCity has brought back their FREE college fantasy football leagues (powered by U-Sports). college football season is just around the corner. in fact i just got my EA SPORTS NCAA FOOTBALL 09 for XBOX the other day and it’s fun stuff! Not only are the TicketCity leagues free, but team managers are eligible to win $35,000 worth of prizes! that’s hard to beat… about as hard to beat as my team suckas 🙂

so earlier this evening i downloaded and installed the new iTunes 7.7 software and also the work-around install for the iPhone 2.0 firmware (for my 1st generation iPhone). the installs were trouble free and easy enough, although i’d say the iPhone firmware update took 15-20 minutes. after resyncing my iPhone i started exploring the iPhone App Store. there are a lot of apps, free apps, apps for as cheap as 99 cents and i think i saw a few apps for as much as $59.99. i didn’t buy any apps but i did install a few free ones that i found to be pretty cool… and i held myself back from buying the Super Monkey Ball game for $9.99 although it seems like it’d be the coolest game currently in the iPhone app store, since it utilizes the way cool accelerometer.

here’s a few free iPhone apps that i grabbed:

WeatherBug – nice interface with more info than the standard iPhone weather app. i wasn’t happy to see that you could only save 3 locations though that limitation needs to go away.

iTunes Remote – an official Apple app that allows you to remote control the iTunes software from your iPhone. this is a really nice feature. now that i have this capability i’m going to get iTunes installed on my media pc in the living room theater (currently just using Yahoo unlimited).

AOL Radio – this is iPhone app is going to be used a lot at work 🙂 finally an app that will give me access to the talk radio shows and music stations around the country without needed to stream via our company bandwidth (which is a precious commodity). no more reliance on my iPhone’s 8Gb drive of limited music and stale podcasts.

Pandora Radio – if you don’t know about Pandora you’re missing out on more than you can imagine. Pandora is one of the coolest music related websites ever and now it’s on my iPhone. this app too will be used extensively while i’m working.

Jott – tomorrow i’ll actually play with this, but it looks like a nice app for voice recordings. seems like a better solution for notes than the ‘notes’ app since you don’t have to type (except to label the recording)

so there ya go, a few ideas for iPhone apps you should check out. in the not too distant future i hope to have a couple iPhone apps of my own creation on the App Store. i’m not saying what they are yet… but i’ll definitely post about them once they’re actually completed.

it’s been announced… straight from Steve Jobs himself. the new iPhone planned for release on July 11th will not only have 3G (which should’ve been included on version 1 imho) but more importantly it will indeed have native GPS!! with the open SDK and soon launching App Store this device is a bargain at what the old iPhone sold for. but hold up… the iPhone 2.0 is going to retail for $299 for 16GB and $200 for an 8GB. yeah that is cheap. afterall what’s a decent GPS only device running these days… $200+

sorry Apple haters… they’ve once again pushed themselves out to the cutting edge… and for once their not pricing themselves out of the lions share consumers. i dunno about all you other windows developers but my plans to dabble in the world of iPhone development just bumped up a notch on my endless todo list.

my friends and frequent visitors have undoubtedly noticed my lack of blogging over the past couple of months… but they probably didn’t know that I’ve been doing better at least with keeping up with their blogs. i’ve tried a few feed readers in the past and nothing really fit my style too well… i’m also not an iGoogle or MyYahoo homepage kinda user. but, i did find a really cool rss feed reader that integrates nicely with Outlook that has made it easier for me to keep up with the double digit number of blogs i try to frequent. that nifty rss feed reader for Outlook is called RSS Popper. it works with Outlook 2000, Outlook XP and Outlook 2003… and the makers claim it works with Outlook 2007… but i’m pretty sure 2007 supports RSS natively. Also, Outlook Express users can pull RSS feeds using RSS Popper!

you can get the RSS Popper here 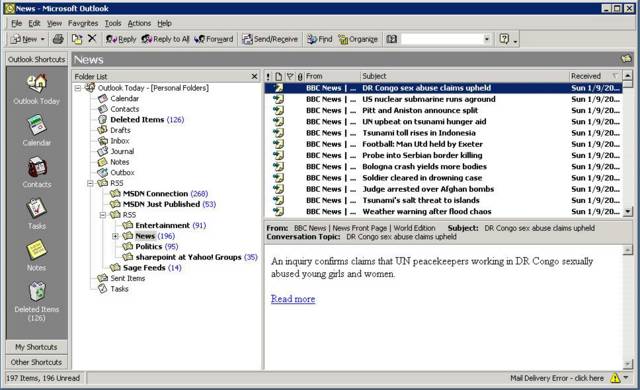 thanks to this little rss reader i’ve gotten see just how much my buddy JJ (Double Danger) has been turning more and more into a garden blogger with each passing day 🙂 and it’s totally cool too… it looks like he and shala are having a lot of fun creating a beautiful yard.. can’t wait to see it one of these days!

yeah so it’s barely January and I’m already bringing up March… sorry… but i stumbled upon this cool little comedy movie March Madness bracket… while researching various College Basketball March Madness brackets… and wanted to share. from the movies listed my finals came down to “The Jerk” with Steve Martin and “Old School” with Wil Ferrell, Vince Vaughn & Luke Wilson. who won? i can’t pick it… i could watch either movie at almost any given point in time… if it’s on i’m probably not going to turn it off.

in the world of free graphics software there isn’t a huge variety… imagine that.. companies wanting to charge for software 🙂 anyhow there are a couple of powerful tools like the GIMP and don’t forget Micro$oft’s Paint… okay so Paint isn’t powerful… it’s almost worthless these days. anyhow, i’ve been using another M$ program “Paint.Net” that is a lot better than the old school Paint… and i like the interface much better than the GIMP’s.

so if you don’t have much cash to spend on image editing software and you don’t like “cracking” expensive products like PhotoShop and you use Windows… checkout Paint.Net >> http://www.GetPaint.Net