some of you might remember what i was saying a year ago… “if you wish you could go back in time and buy Microsoft stock when it was cheap then just be ready to buy stock in Google when they go public” also “if you get Google stock.. it’s a long term HOLD… don’t sell… resist… it will pay off… it’s not a short term buy”

i wish i could say that i could have purchased the stock when they went public… unfortunately i had debt to deal with and was in an unstable financial environment… however, very soon i guarantee i will be purchasing as much as i can get my hands on… and not for a short term fix (the stock is going to flux, but it will continue to climb!)

for those of you who have Adsense accounts and are wondering if the EFT is a good choice… my opinion is a very strong YES.

Google used some terminology which made it sound like there might be problems with the transactions and so a lot of people were weary of signing up for the service. i too was a little hesitant… but i figured G was just covering themselves in case something did go wrong. seems to me their testing was thorough enough… as i got my direct deposits 2 days ago!! no more sending checks to the bank and waiting for them in the mail 🙂

so if you have an Adsense account i’d say… go for it!

here are the results for my last poll: 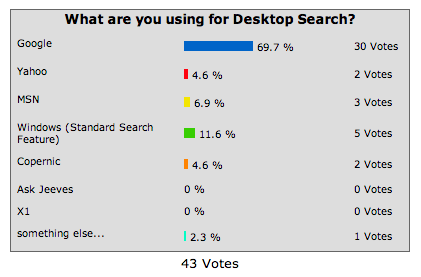 hey MSN Search is down!

how does that happen i wonder? u gotta do something bad to bring down the search engine of a company with enough money to eliminate tight bandwith and server power.

their unavailable page should be a blue screen of death… just for giggles… hehe.

i posted some of my personal opinions there, and maabster linked to a couple of interesting articles.

I closed my first ever poll on this site…

The poll was “What is your favorite / most used web search engine?”

I appreciate the input from everyone who submitted to it!

Here are the results: 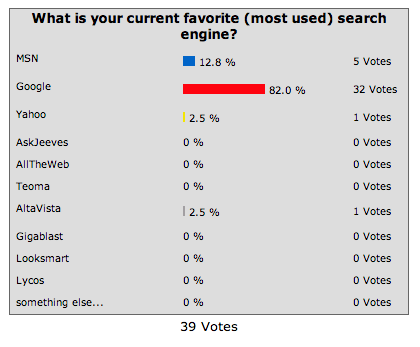 as much of a google fan and user i am, can u believe i haven’t used it yet. it has been in beta for a while. i personally have held off just because of the privacy issues. i haven’t got to play with it in a controlled environment, which i hope to do soon, and i know that there are some issues i personally want to be crystal clear on before i install it myself.

the best thing about Google’s offiicial release is the fact that they have published an SDK >> http://desktop.google.com/developer.html

so, now u know if u didn’t already… let me know if you’ve used it, been using it or if u r like me and holding off for a bit; and if you are using it, what do you think about it?

Yahoo! is a little behind in supporting the developer community by opening up SDK’s and what not. however, they’ve finally given us something to play with:

Kanoodle is evidentally going to try hard to compete with Google in the contextual ad market:
http://www.eweek.com/article2/0,1759,1549395,00.asp

micro$oft finally decided to get with the program when it comes to web search. if you’re in the dark, msn has been using other search providers to power their search engine. because of the buzz… and HUUUGE IPO of google m$ decided that perhaps their is ‘more’ to web search than the had thought (‘more’ as in CA$H).

anyhow, i’m a happy camper with m$’s new search engine. basically it has added an additional 20% traffic to my various websites and added put a little more money in my pocket too (which u can never complain about).

but the big question is…. is the m$n search engine any good???

my sites rank well and my sites aren’t spammy… i would say my sites are the best in their niche… so based on my sites and niche areas i would say m$ has it right. however i might be blinded by the revenues they are helping me make… so what do u think? is m$ web search worth a flip or are u a bonafied googler til u die? or are u just a plain vanilla yahoo searcher? or do u use any search engine without regard to quality or presentation?